Around the world, ethnic Indian jewellery has been described as ‘elaborate’, ‘hypnotic’, ‘extravagant’, and ‘intricate’. To the connoisseurs of jewels, traditional & ancient jewellery styles have always been fascinating for the sheer amount of craftsmanship it entails. One such form of jewellery, one of the oldest in India, is Kundan jewellery, hailed for its stately and resplendent appearance and masterful crafting.

Kundan jewellery is a regular feature on actresses in Bollywood epics, an essential bridal adornment and the pride and joy of Indian women across demographics.

What is Kundan Jewellery?

It is a form of gemstone and glass jewellery that is set between gold foils. Its defining features are its precious and semi-precious polished gemstones that are set in layers upon layers of beautiful shapes and patterns. 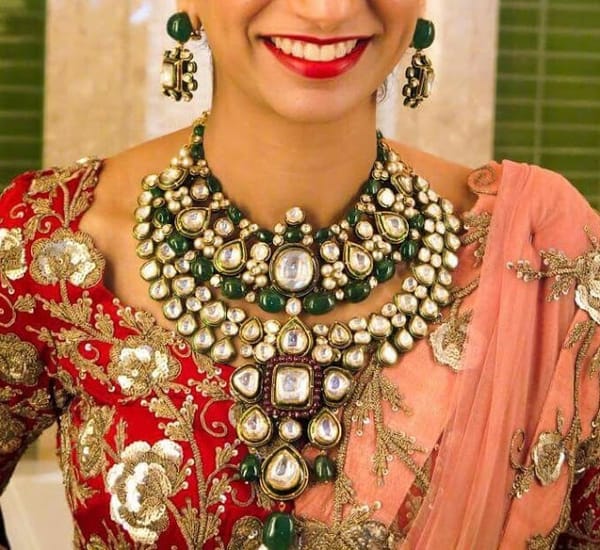 India’s obsession with jewellery began with the advent of Indus Valley civilisation more than 5000 years ago, and since then numerous styles of jewellery making have been created and mastered.

The art of Kundan jewellery flourished in the royal courts of Rajasthan and Gujarat under the encouragement and patronage of the Mughals from the 16th century onwards. However, the craft had already been in use prior to Mughal involvement. But the Mughals gave it a new impetus. It is said that many Kundan crafting and setting styles were passed on to the artisans of Rajasthan and Gujarat from Delhi courts. Kings and statesmen of ancient India not only commissioned jewellery made of Kundan stones but also used Kundan work in the design of their royal attires and even as an embellishment on royal furniture.

Another name for this traditional art or technique is Kundan Keshari.

How is Kundan Jewellery Made?

Long man-hours are consumed by creating a Kundan masterpiece. The process is highly complex too. Each process has a specially designated craftsman in most cases since a finely matured skill is needed at every stage.

It starts with the construction of the skeletal framework which is known as ‘Ghaat’, followed by the procedure of ‘Paadh’ where lac or natural resin is poured into the base and shaped according to the Kundan set designs.

The next stage is called ‘Khudai’ where the uncut, shaped, polished (multi-coloured or single coloured) gemstones, as well as glass, are laid upon the framework. More Kundan or melted gold is added to the edges for a neat, polished look. Details are fine-tuned with the addition of Meenakari at this stage. After that, the process of ‘Pakai’ involves adding the gold foils to hold the piece firmly together. The final stage is the ‘Chillai’ where the gemstones are properly polished.

The addition of stunning Meenakari engravings makes the piece a reversible wear. 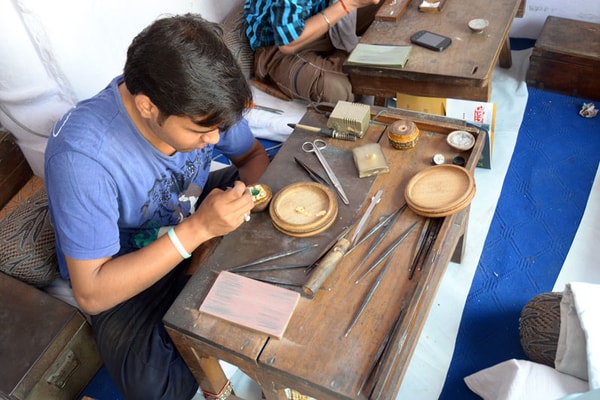 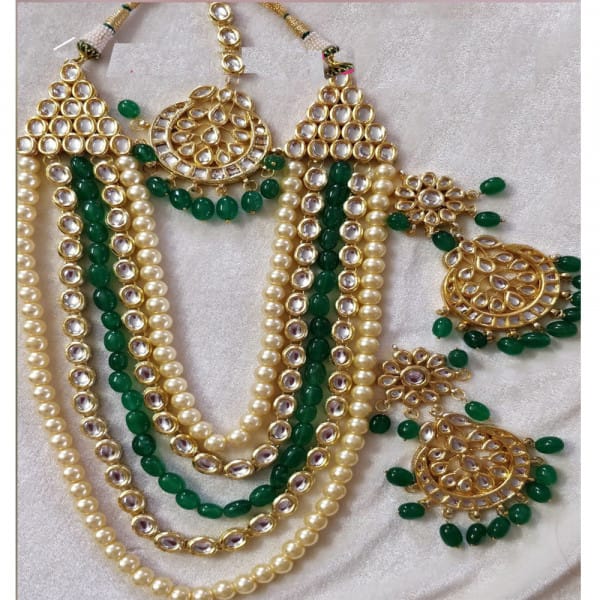 Kundan Vs Polki Vs Jadau

Kundan jewellery uses gemstones and glass in its craft while,

Polki involves using uncut, raw diamonds without any processing. The rustic look of uncut diamonds in Polki is highly expensive and coveted. Many aristocratic and wealthy families give them as precious heirlooms. Polki is known to be more expensive and illustrious than Kundan jewellery.

Jadau is nothing but the technique used to make Kundan as well as Polki Jewellery.

Why is Kundan Jewellery so popular 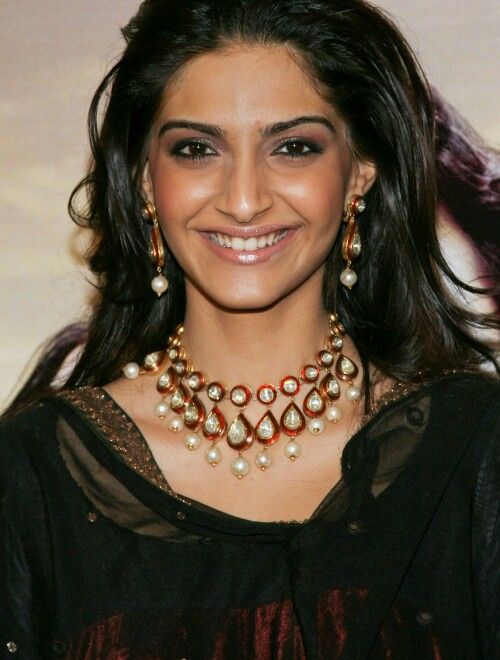 Kundan jewellery is always in demand, even more so during the wedding season. No Indian bridal ensemble is considered complete without a lavish inclusion of Kundan Jewellery. Aside from weddings, Kundan jewellery is worn at any social gathering, celebration or religious ceremonies. Millions of women buy Kundan jewellery to complement their Indian attires and some even wear them with contemporary, western outfits as a style statement.

Authentic Kundan jewellery is special for its flawless finishing and age-old crafting techniques which makes them a good investment too.

Quite a large number of women in India are inspired by Bollywood fashion. The popularity of Kundan jewellery was given a mainstream push when movies like ‘Jodha Akbar’ and ‘Ram Leela’ portray their leading women wearing mesmerising Kundan jewellery that set the screen on fire.

The fanfare gets even more crazed when famous Bollywood actresses like Aishwarya Rai, Shilpa Shetty and Kareena Kapoor wear designer Kundan jewellery on their wedding days.

The Indian entertainment industry, including television bahus and movie divas, have contributed majorly in drawing attention to this traditional jewellery style.

A Kundan jewellery set typically includes an elaborate necklace and equally elaborate pair of Kundan earrings. A Kundan bridal set comes with a maang tikka and matching cuffs and head ornaments too and is heavier and more embellished than a regular Kundan set. 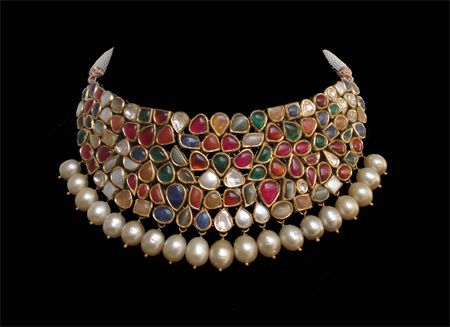 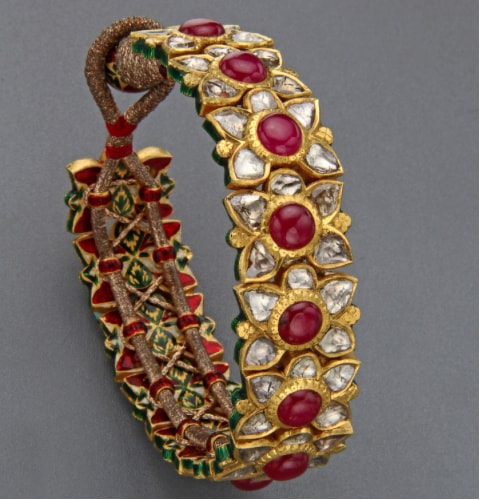 How much does Kundan Jewellery cost?

Handmade Kundan Jewellery made with real gold and expensive gemstones can cost anywhere from Rs. 50,000 to Rs. 5,00,000 Lakh. But because Kundan jewellery has become a type of in-vogue fashion jewellery among the young women of India, you can find reasonably priced sets and pieces starting from Rs. 5000 (sometimes even less).

These are not made from pure gold, they are imitation Kundan jewellery sets, hence the lower price. But if you aren’t fussy about the imitation aspect of it, such affordable Kundan sets are a fine replacement for a pure gemstone and gold Kundan set.

How to shop for authentic Kundan Jewellery 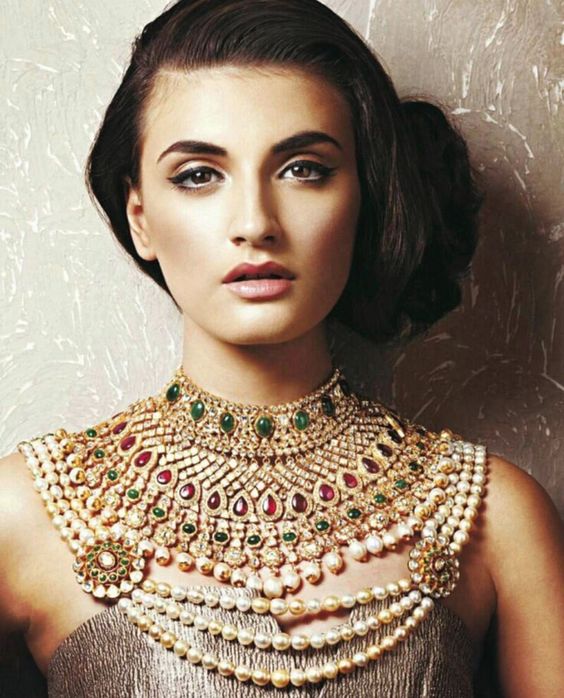 The truth about Kundan jewellery is that because of its beauty and popularity, imitation versions, and artificial Kundan jewellery, are abundantly available in brick and mortar shops as well as online. These are really affordable brass or metal interpretations of the real deal, hence you will find many women wearing them and perhaps even flaunting them.

The real Kundan is rare, exclusive and not cheap. You will have to dig deep to hunt down that handmade Kundan necklace that speaks to your heart and is 100% authentic, made by craftsmen in a small nook of Jaipur or Bikaner, spending hours to perfect each stage of the masterpiece. Keep this in mind when shopping for Indian Kundan jewellery: 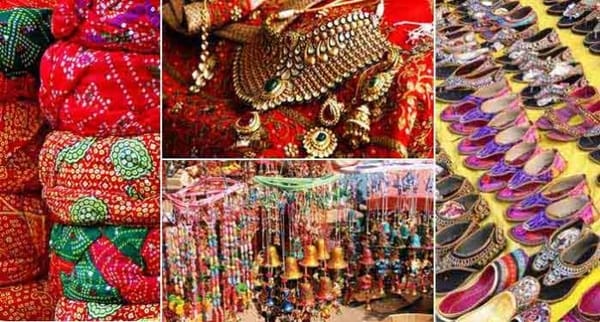 Jaipur: Jaipur in Rajasthan is known as the centre for the best Kundan designs, specifically the Johri Bazaar in Jaipur. Bikaner and Nathdwara are also well-known for their Kundan craft. Big cities in Gujarat like Ahmedabad and Baroda also sell great Kundan Jewellery. Delhi and Hyderabad are also good destinations to go Kundan shopping.

Branded Stores: If you choose to buy Kundan jewellery from a national brand, you can either visit their showroom in your city or buy their collection online too. Some famous brands that sell Kundan sets are TBZ, Kalyan Jewellers, Velvetcase, Haritika Jewellery, Paliwal Jewellers, Rivaah by Tanishq, Suhani Pittie, Mangat Rai, Malabar Gold & Diamonds, Sabyasachi Jewellery, etc.

Online shopping: Albeit online marketplaces sell everything at your convenience, we suggest that buying Kundan should be experienced in person at a physical store or in an authentic setting of Rajasthan or Gujarat. The rarest and the most ethnic pieces of Kundan may not be available online.

The thrill of hunting for handmade Kundan jewellery inside a crowded and lively jewellery bazaar of Jaipur or Hyderabad is an experience to cherish.

How to clean Kundan Jewellery?

What if Kundan Jewellery Gets Black?

How to Identify Real Kundan? 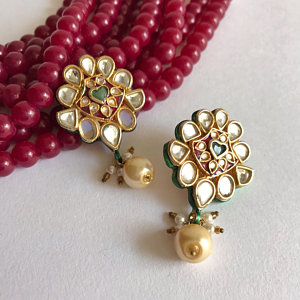